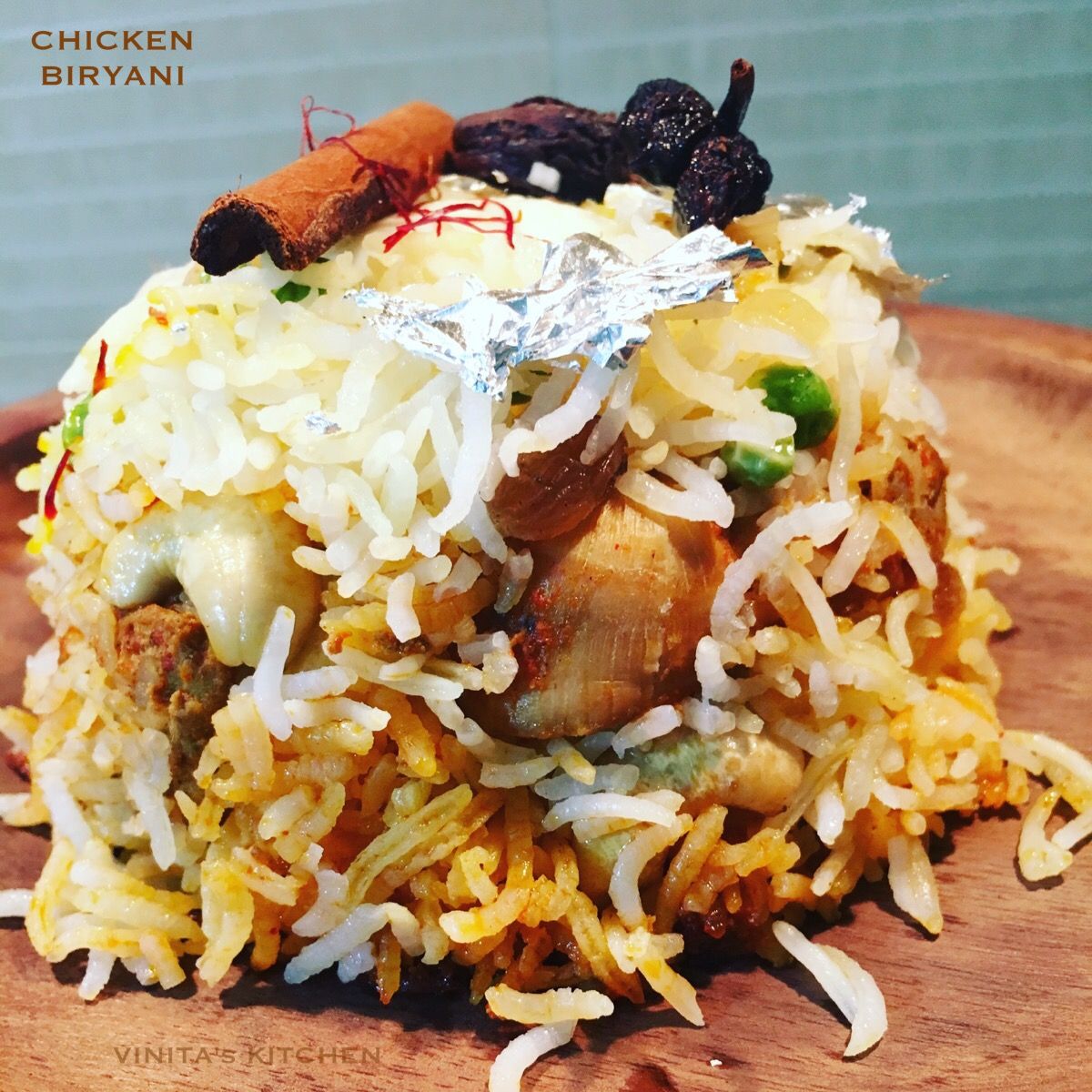 You all know this dish.. Right?? So nothing much more to ellaborate about this Muslim originated rice dish accompanied with meat and spices of the Medieval Subcontinent.

This very famous dish cooked in South Asian part of the globe. Our country India has vivid types of biryani recipes. I think every state has their own style of cooking this dish. I have cooked in my way🤗. Have added 6 eggs too.

This recipe can be served to 5-6 people in lunch or dinner with rassa or raita.

5 heaped tsp biryani masala.. I use my homemade one

FOR ASSEMBLING AND GARNISHING:

Caramelised one julienned onion with 1/2 cup of green peas

Handful of cashew and raisins fried in ghee

Firstly marinate your chicken by mixing all the ingredients mentioned above in FOR CHICKEN MARINATION column.

Cover and let the chicken intake all the flavours of curd and spices for 4-5 hours. Although if you are in jiffy, can start cooking after 1/2 an hour too of marination.

Now prepare the milk, ghee and saffron mixture. Just heat milk and ghee until hot. Add saffron strands. Cover and keep it aside.

After the chicken gets marinated, heat ghee or oil in a pan. Add cumin seeds. Let it splutter. Add onions and pinch of salt. Stir until golden pink. Now add cinnamon and tomatoes. Cover and cook until tomatoes melt.

By the time heat 1.5 ltr approximately water in a large vessel. Add salt so that it boils sooner. Add spices too as mentioned above in FOR COOKING RICE column. When the water boils at high flame, add clean and washed rice along with half cut lemon. Lemon helps the rice to be separated and also it prevents them from breaking. Stir all well and cook only until half done.

Now as the chicken is getting cooked, you can see the juices all around the pan. Add red chilli powder and adjust salt. Be careful about salt as we have added it at various steps.

Now increase the flame to med low and cook until done. By that time all the juice will be soaked and you can see the oil all around the pan.

Transfer the chicken into a pan and spread in which you will layer and cook after assembling. Place eggs too.﻿

In the same pan just add some ghee. Add onions and peas and cook until golden brown. Also add some ghee and fry cashew and raisins until light golden in colour.

Keep eyes on rice too. As it is half done, just strain in any large strainer. Shake all around and keep it aside on any heavy vessel so that extra water gets strained off.

Now what I did, given layer of chicken… Then spread the rice all over on top.

Scatter caramelized onions and peas and lastly garnished with fried cashews and raisins.

With the help of spoon, sprinkle milk mixture all over. Covered and placed the vessel on minimum flame for 15 minutes. Don’t uncover now. After half an hour, remove the lid and serve with raita or rassa of your choice. 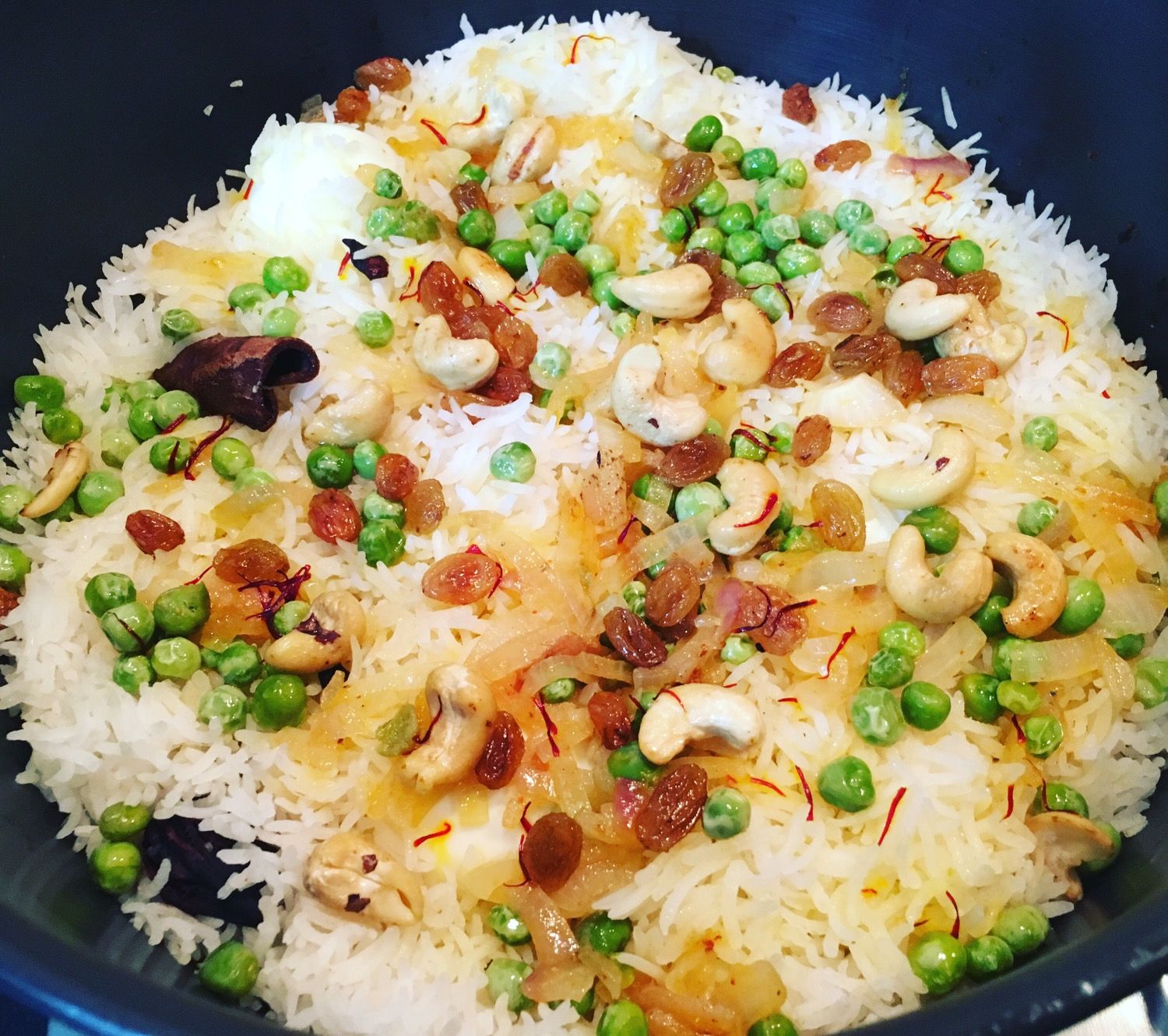 As its only 1/2 kg chicken biryani with 1/2 kg rice, so I have given a layer of both. If more in quantity, give 2 layers of each in alternate basis and repeat the sprinkling of milk mixture and dry fruits including caramelized onions and peas after giving the layer of rice each time.